Controversial Chief Executive Officer ( CEO) Rudolph Small, has resigned from the Linden Hospital Complex (LHC). The resignation took effect about one month ago. Currently acting in the position is Regional Health Officer (RHO), Dr. Gregory Harris. Regional official related that a new CEO is expected to be appointed soon. While the reason for the resignation was not related at the recently held statutory meeting, where Regional Executive Officer (REO) Dwight John, announced in to the Regional Democratic Council (RDC), regional officials are confident that it was as a result of pressure from the staff members and elected officials who for months protested for his removal.

In an invited comment, Regional Chairman Deron Adams, said under Small’s tenure, the LHC has seen the resignation or dismissal of a number of nurses and administrative and other staff members, many of the policies and projects that were undertaken previously to ensure improvement of healthcare services saw regression, many long standing contractors lost their contracts with the hospital and many decisions that were not favourably received by the staff members were unilaterally made by him.

In this regard, the Regional Chairman is calling for the installation of a Board of Directors to ensure direct power is not given to one individual as was the case under Small’s tenure. “We do not want to have a situation where one person is unilaterally making decisions that are not in the best interest of the people. We want to ensure that a board will have oversight over a number of critical things in relation to the health of our people,” Adams said.

He reiterated that there is need for a CEO that will ensure high-end technology is brought to the hospital and more specialized services, training is given to staff, that LHC is a welcoming environment, one who is open to criticism, amongst other things.

“We want MRI machines, CT scanners and other things to be invested in the hospital from the oil resources that we too in Region 10 should benefit from.”

Small first went into the spotlight following derogatory remarks he made about nurses working the night shift, to the media. He was also criticized for terminating the contract of the St John’s Brigade, illegally erecting a new fence on the public road and more recently not renewing the contracts of several employees, a decision later overturned by the Minister of Health. 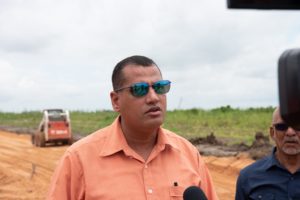 Development of Millie’s Hideout Housing Scheme to commence in weeks