A mentally ill man identified as Hosia Ajadai, is in custody assisting with the investigation of the death of his mother, whose body was discovered on Tuesday evening in their home. The deceased, who was also mentally ill, has been identified as Wanda Wilson or Sheila Wilson.

According to the police, an eyewitness reported, that he was called to make checks on the deceased and her son. As a result, he proceeded and on arrival, he met with the son and he observed the entire dining area ransacked and furniture and other appliances were scattered. The eye witness told INFO 10 that when he visited the house, the son met him at the door but was not allowing him in. “I then ask he where he mother, he said he mother resting. I said well call your mother for me and he said he can’t call her because she resting, she does work security work and she got to rest. So I decided to go to the police station because when I peep in the house, you won’t believe people living there,”

He then suspected that something was wrong and he proceeded to the McKenzie Police Station, where he reported his observation and the ranks left with him.

On arrival at the scene, the ranks did a walk through and observed the entire house ransacked. The victim’s body was discovered in a bedroom on a bed with a door atop her.

The body was examined for marks of violence and the head and face appears to be smashed in.

The eyewitness the household appliances in the home were broken up. “If you see this house, TV break up, microwave break up, plate, glass, you won’t believe people living in deh. I don’t know if they had a fight or something.”

The body was escorted to the Linden Hospital Complex where it was pronounced dead on arrival by the doctor on duty and subsequently escorted to the Pensioner Funeral Home for storage awaiting PME.

Ajadai was taken to the Linden Hospital Complex to be examined by the doctor. No marks of violence was seen on the most exposed parts of his body. He is currently in custody pending investigations. 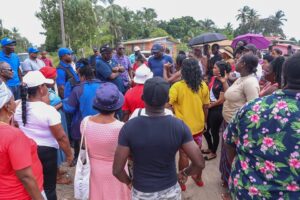 Linden residents speak out about upsurge in gang violence